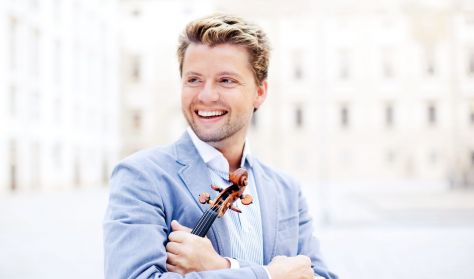 Mozart and Salieri? Most music listeners are likely to think of Rimsky-Korsakov’s one-act opera, Peter Shaffer’s play Amadeus or the classic film adaptation of it from the director Miloš Forman. Famous scenes, memorable jokes and, of course, one classic trope: the conflict between the Genius and the Mediocre Artist. At this concert, it is not the two composers themselves we will encounter, but rather their music, as we come to realise that it is not only Mozart’s music that is thoroughly enjoyable: Salieri’s is too.

It was one of the most unworthy acts of slander spread in music history, starting with contemporary rumours in the late 18th century and then dogging the innocent Antonio Salieri over the centuries, accusing him of poisoning Wolfgang Amadeus Mozart because he envied the talent of his younger, by six years, associate. In reality, Salieri was not only a great composer who enjoyed considerable success, he was also a generous man, having discovered and assisted Schubert when he was a child and taught the young Beethoven. Orphaned in early adolescence, Salieri was taken to Vienna by the well-known composer Florian Leopold Gassmann, who personally paid for his education there. In memory of this, Salieri himself would later on teach all of his students for free. At this concert, the music of Salieri and Mozart fits together peacefully. It is no coincidence that the first number of the second part, Salieri’s Symphony in D major, was given the moniker "Veneziana", as Salieri, born in the Venetian Republic, often appended the name Veneziano to his signature. From Mozart, the concert features a violin concerto and two significant mature symphonies, the "Haffner" and the "Linz". What makes the evening special is having the great Lithuanian violin virtuoso Julian Rachlin not only play the Violin Concerto No. 3 in G major to open the evening, but also conduct the entire programme.